SPOILER ALERT: If you don’t want to know, click away now, because the ending is revealed below: END_OF_DOCUMENT_TOKEN_TO_BE_REPLACED 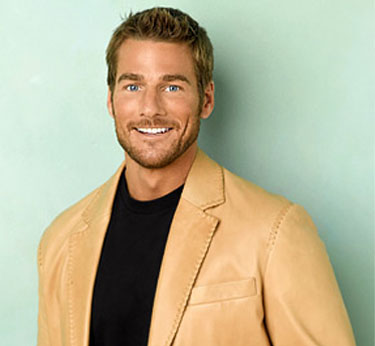 The question is, why would Brad put himself through this again? If you missed Season 11, here’s a short recap in pictures: END_OF_DOCUMENT_TOKEN_TO_BE_REPLACED 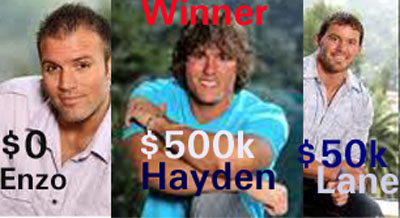 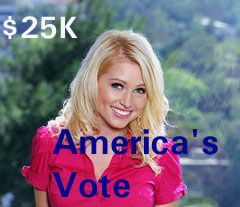 Brittany grabbed the heart of viewers, and won 25k. Hopefully, it will be a small consolation when they tell her that last night in Arkansas, her home burned down. For real.

Face it. The Bachelor Pad sucked. Horrible show, torturous to watch. But, guess what? The finale was good. The right couple won, but the real winner is comeback kid of the year, Wes Hayden.

To recap: Congrats to Dave and Natalie. Of the two final couples, they were my fave by miles. I’ve always liked Natalie, she has so much moxie and not an ounce of fake goody-two shoes-ness. Dave really rehabilitated himself from his angry, psycho, over-macho performance on Jillian’s season, something I never would have thought possible. I actually liked him on this show.

But my favorite part, and I’ll bet I’m not alone, was Wes and Gia. They make a great couple, and he’s so due some love after the way the show trashed him with its hatchet-editing job on Jillian’s season. I’m glad Chris Harrison acknowledged it — and they let him sing at the end.

I doubt Kiptyn and Tenley will make it, she’ll drive him crazy with her helium voice and two note repertoire, little girl giggles or crying. I don’t care about them one way or the other, but I really hope Wes and Gia last. I think Gia is the best looking woman to appear on the show, all seasons combined, and she seems to have a big heart to match. Elizabeth? Yikes, run for cover. Nikki? Loosen up girl, you come across like a grandmother. Memo to Michelle: Karma’s a b*tch. Which is why you should have forgiven Tenley when she apologized (for the third time.) It will come back to bite you. END_OF_DOCUMENT_TOKEN_TO_BE_REPLACED

The final three couples compete in a dance-off with pros Chelsie Hightower, Edyta Sliwinska and Louis Van Amstel from DWTS. Who wins? Which couples are still together? Reality Steve has the answers. (Unfortunately, he’s added ads with sound to his site which you can’t turn off. Hope he removes them soon.)

In part One, the three remaining contestants, Hayden, Lane and Enzo, compete in an endurance contest. Hayden won.

Part Two will be a skill game between the two who lost in Part One: Enzo and Lane. It will air tonight.

Part three will be a knowledge test about events that occurred during the season. It will be between Hayden and the winner of Part 2.

The winner of Part 3 will become HOH. The other two houseguests will automatically be nominated for eviction, but since they can’t vote, the HOH breaks the tie and chooses who to evict. The other guy moves to the Final Two with him.

Again, Parts 1 and 2 will air tonight and Part 3 will be shown on Finale Night, and right after the third guy is eliminated, the members of the jury house will come on to vote for the winner. Also, the viewers’ favorite and winner of the $25,000. prize will be announced.

Via MediaLite: Wynn Las Vegas put out a press release with the odds of winning for each of the new couples on Dancing With the Stars. In last place, at 35:1, Bristol Palin and Mark Balas.

MediaLite makes a good point about why Bristol may not be sent home as early as some think: Sarah Palin’s Facebook Friends could keep her in.

A big part of the elimination process is fan voting. You don’t think Sarah Palin can use the power of her Facebook page to mobilize support for her daughter’s cha-cha?

In third place, the couple I’ll be rooting for: Jennifer Grey and Derek Hough.

The full list of couples and odds follows: END_OF_DOCUMENT_TOKEN_TO_BE_REPLACED