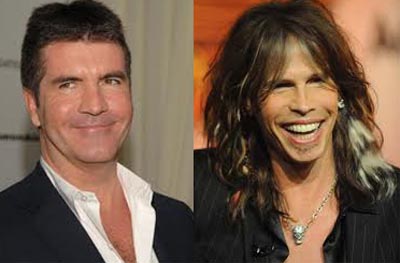 What about Simon Cowell’s replacement? Word is it will be Aerosmith’s Steven Tyler. More here.

I’m more excited about Steven Tyler than J-Lo. What a better pick Tyler is over Elton John or Howard Stern. As to Ellen leaving, it’s what she wanted. She says it wasn’t fun. She had a year left on her contract and Fox let her out early. Who would be even better than Tyler? Jon Bon Jovi, but if they can’t afford Elton John, I doubt they can afford him, and he’s committed to touring for at least another year.

Will young fans think Tyler is too old or too weird? Very Possibly. Will he fit with Randy or Kara, or J-Lo? it’s very hard to picture them together. Maybe more changes are in store. Comedian and talk show host Ellen DeGeneres will replace Paula Abdul as a judge on American Idol, beginning with the 2010 season.

“I’m thrilled to be the new judge on American Idol,” DeGeneres said Wednesday. “I’ve watched since the beginning, and I’ve always been a huge fan. So getting this job is a dream come true, and think of all the money I’ll save from not having to text in my vote.”

Why did Fox pick Ellen?

We feel that her vast entertainment experience, combined with her quick wit and passion for music, will add a fresh new energy to the show.” Are publicists being upstaged by their clients? Paula Abdul used Twitter tonight to break the news she is not returning to American Idol. From her Twitter account

With sadness in my heart, I’ve decided not to return to #IDOL. I’ll miss nurturing all the new talent, but most of all..Cont’d…:

Even Ryan Seacrest found out through Twitter and his blackberry:

about to go to sleep when I started seeing my blackberry blow up. I have read what u have read and I am shocked and saddened about paula

I really could care less about Paula leaving or Kara DioGuardi returning. The only judge with anything interesting to say in my view is Simon Cowell. Randy Jackson and Kara are more like furniture, they lack star quality and Kara’s personality is more than a tad grating to many.

That said, Paula was very popular and part of the show’s success. Unlike Kara and Randy, she has the glitz and the showmanship the show needs. And she and Simon had a good ying/yang chemistry. It seems to me American Idol wanted Paula out and they knew exactly what buttons to push to get her to make it her decision. It can’t be about money since Ryan Seacrest just got a hefty pay raise and Simon makes a fortune. We’ll see how big a blunder, if any, AI and Fox made when the show resumes. It’s official: American Idol runner-up Adam Lambert, featured on the cover and in an interview in the new Rolling Stone, confirms he is gay.

“I’m proud of my sexuality,” Lambert adds. “I embrace it. It’s just another part of me.” Ultimately, however Lambert tells RS contributor Vanessa Grigoriadis that there are other parts of his life that he’s trying to keep front and center. “I’m trying to be a singer, not a civil rights leader,” he says.

He also says he had a crush on AI winner Kris Allen. Allen, totally supports Adam.

I think he’s happier that he can be himself and it’s nice,” Allen told People about Lambert’s relationship with hunky Drake LaBry, with whom he’s been photographed holding hands. “Adam is who he is and he’s not afraid. I support him in whatever he does.”

And, Adam has just signed a recording contract with 19 Entertainment and RCA Recordings. His first album should be out this fall. Final thought: Homophobic Christians took over the American Idol ballotbox, just like they’re trying to do in real life. Sorry, but I think it’s a plausible explanation. Also, 100 million votes but the lowest ratings ever for last night’s finale. Who’s voting besides the viewers and why? The Washington Post says you can expect these questions to be batted around the water cooler tomorrow.

The two-hour finale has just begun. I thought it was just the pre-teen, text-message obsessed crowd that might create an upset on American Idol tonight, resulting in Kris Allen beating Adam Lambert. But, there may be a religious factor and he may pick up a big chunk of the Danny Gokey vote:

[Kris] Allen is a married college student and has worked as a church worship leader. Gokey, a widower, is a church music director.

Allen said Monday that he hoped the outcome isn’t decided by “having the Christian vote.” “I hope it has to do with your talent and the performance that you give and the package that you have. It’s not about religion and all that kind of stuff,” he said.

In any event, it’s going to be a close one.

Even the New York Times is live-blogging the finale. I’ll be watching and updating below. END_OF_DOCUMENT_TOKEN_TO_BE_REPLACED Adam should win, but with the pre-teen, text-message obsessed crowd going for Kris, nothing is for certain.

I’ll update as the show progresses or after it.

Update: Adam blasts it out of the park with Sam Cook’s “A Change is Gonna Come.” He was just amazing. And all four judges lapped it up. While they also loved Kris’ first song, they weren’t anywhere near as blown away as they were by Adam. But, when Paula says, “No matter what happens tonight…” you can tell they too can’t predict the teeny bopper vote. END_OF_DOCUMENT_TOKEN_TO_BE_REPLACED