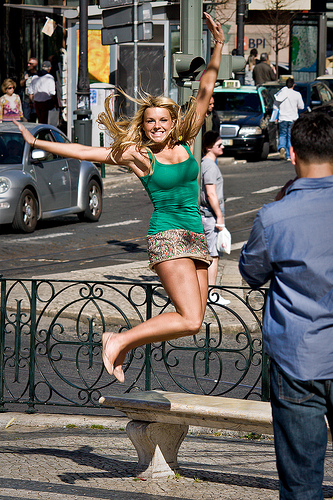 Photo by Pedro Moura Pinheiro, who happened across the show filming in Lisbon. He uploaded at 9:54 a.m. on April 12, and on Twitter, says,

They were filming in Camões (biggish crew, around 2/3 cams, multiple assistants), and she jumped a few times, I caught the second jump.

Before Portugal, Ali and her guys were in Iceland. One place they stayed: Hotel Nordica. The production company is named Pegasus.

Then, April 4 to 14, the Bachelorette with Ali Fedotowski is filming in Portugal. They are staying at the Sheraton Lisboa Hotel and Spa. Among the sites: São Jorge Castle, the route of tram 28 and Sintra.

The seductive and romantic side of Lisbon is the seat angle chosen by the U.S. ABC television to write new scenes of a reality show that is accompanied by 23 million weekly viewers.

More than 80 people, including the production team and competitors travel to Lisbon for the recording of the show The Bachelorette, seen weekly by 15 million viewers in the U.S. and eight million in the world. The success of reality show is at the base of the recording of several seasons.

The group, whose first elements are already in the Portuguese capital, is housed at the Sheraton Lisbon Hotel & Spa, an associated unit of Turismo de Lisboa, located in the heart of the city.

The São Jorge Castle, the route of tram 28 and Sintra are among the sites chosen for the ten days of filming – until April 14 – some of which are written inside of equipment.

The format of this reality show involves a romantic environment in which young candidates compete in the hope they can be “elected” the heart of the couple who co-starred in the episode. The scenes shot in Lisbon will be shown on ABC in May, one of the four main TV channels in the United States.

This initiative strengthens the position of the Portuguese capital as one of the most popular holiday destinations in the world, notably thanks to the wealth and quality of supply, natural beauty and versatility of the equipment.

Nominated for the second consecutive year the World Travel Awards, considered the “Oscars of tourism”, and recently honored as “Best European Destination 2010 – The Choice of Consumers”, Lisbon is a theme to frequent reports of major international media, who are fascinated with the contrasts of the city and the human scale that are in it.

Ali had a date around March 30 at a club called Karamba in Reykjavik, where she and her date danced to Feldberg, a duo of Einar Tonsberg and Rósa Birgitta Ísfeld, whose song “Dreaming” won best song at the Iceland Music Awards a few weeks ago. The song Ali and her date danced to is “You and Me.” You can listen to it on Feldberg’s Facebook or My Space page.

Here’s the video for “Dreaming”:

Before Iceland, Ali and the guys were in New York. So where to after Portugal? Probably back to the U.S. for the home town dates.

How do we know all this stuff? Mostly from following up on clues at FORT, premier Bachelor/Bachelorette sleuthers.

The show begins airing May 24 and ends May 2.