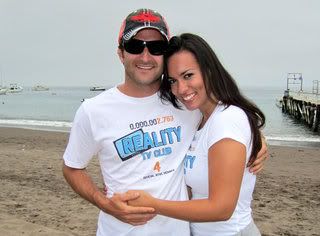 Ali: “The finale is really good. Sometimes they can seem very orchestrated. This one is very real,…I feel like I made the best decision that I could.” END_OF_DOCUMENT_TOKEN_TO_BE_REPLACED

President Obama was given a pop culture test on The View this week. He knew Lindsay Lohan was in jail, but said he didn't know who Snooki was.

”Should Snooki run as mayor of Wasilla?” And he replied, “I’ve got to admit, I don’t know who Snooki is.”

But, at the White House Correspondents dinner, he knew who she was. In a quip about the new tax on tanning beds law, he said:

“This next provision (in the health care bill) is called the Jersey Shorah. It reads, ‘The following individuals shall be excluded from the indoor tanning tax within this bill: Snooki, JWOWW, The Situation and House minority leader John Boehner.”

Snooki meanwhile isn't thrilled about Obama either. On the season premiere of Jersey Shore Thursday night, she said she switched to spray tanning because of Obama and his tax. END_OF_DOCUMENT_TOKEN_TO_BE_REPLACED

What about Simon Cowell’s replacement? Word is it will be Aerosmith’s Steven Tyler. More here.

I’m more excited about Steven Tyler than J-Lo. What a better pick Tyler is over Elton John or Howard Stern. As to Ellen leaving, it’s what she wanted. She says it wasn’t fun. She had a year left on her contract and Fox let her out early. Who would be even better than Tyler? Jon Bon Jovi, but if they can’t afford Elton John, I doubt they can afford him, and he’s committed to touring for at least another year.

Will young fans think Tyler is too old or too weird? Very Possibly. Will he fit with Randy or Kara, or J-Lo? it’s very hard to picture them together. Maybe more changes are in store.

But something else may be in store for us, as ABC says she makes a “last minute, heart-wrenching decision which changed all of their lives forever.” That suggests she picks no one. In fact, today’s press release from ABC: Something happens on the Last Chance Dates. Chris’ sounds particularly ominous. END_OF_DOCUMENT_TOKEN_TO_BE_REPLACED END_OF_DOCUMENT_TOKEN_TO_BE_REPLACED

Here’s Ali on the red carpet after the Men Tell All. At the very end, she says it’s definitely possible to find love on the Bachelorette, and we’ll have to wait to find out if she did, but, she insists, there are real emotions involved. She then seques into the media, saying, “I just hope I have the strength to deal with it in the right way.”

If she made a traditional pick, Chris or Roberto, why would she need strength to deal with the media?. She’s shown herself to be quite the media darling the last few weeks as they follow her every move in L.A. from jogging to shopping to getting manicures and hair extensions. Only if the media turned on her, would she need strength to deal with it. Yet, that’s seems to be what she’s expecting.

So, why would the media turn on her? END_OF_DOCUMENT_TOKEN_TO_BE_REPLACED